PAL made history with its largest aircraft order, a USD 7 Billion deal for dozens of Airbus A330 widebody and A321 narrowbody aircraft.

PAL entered into an agreement with San Miguel Equity Investments, Inc. (SMEII), a wholly-owned subsidiary of San Miguel Corporation, which bought a 49% stake of the airline for USD 500 million.

PAL launched a pioneering service to Toronto, Canada, opening a gateway on the East Coast of North America after an absence of 15 years.

PAL returned to Europe with a 5x weekly nonstop service to London Heathrow after a 15-year hiatus. The service initially operated as a 15-hour B777-300ER leg overflying South Asia and the Middle East, until breakthrough aviation deals in 2014 allowed for overflights through Eastern and Central Russia, cutting flight time to just 13 hours.

The Lucio Tan Group regained control of the airline when it purchased back the 49% shares held by San Miguel Equity Investments, Inc.

PAL launches a three-times-weekly service to Quanzhou’s Jinjiang Airport in Fujian province, China, the ancestral homeland of most Filipino-Chinese families. Airbus A320 aircraft are deployed on the route.

PAL introduced Auckland (New Zealand) and Cairns (Australia) to its international network with an Airbus A320-200.  PAL would upgrade the Auckland service to nonstop flights in December 2017, using A340s and later A330 aircraft.

PAL accepted its first Bombardier Q400 “Next Generation” turboprop in Toronto, as the launch operator of the dual-class 86-seater aircraft. 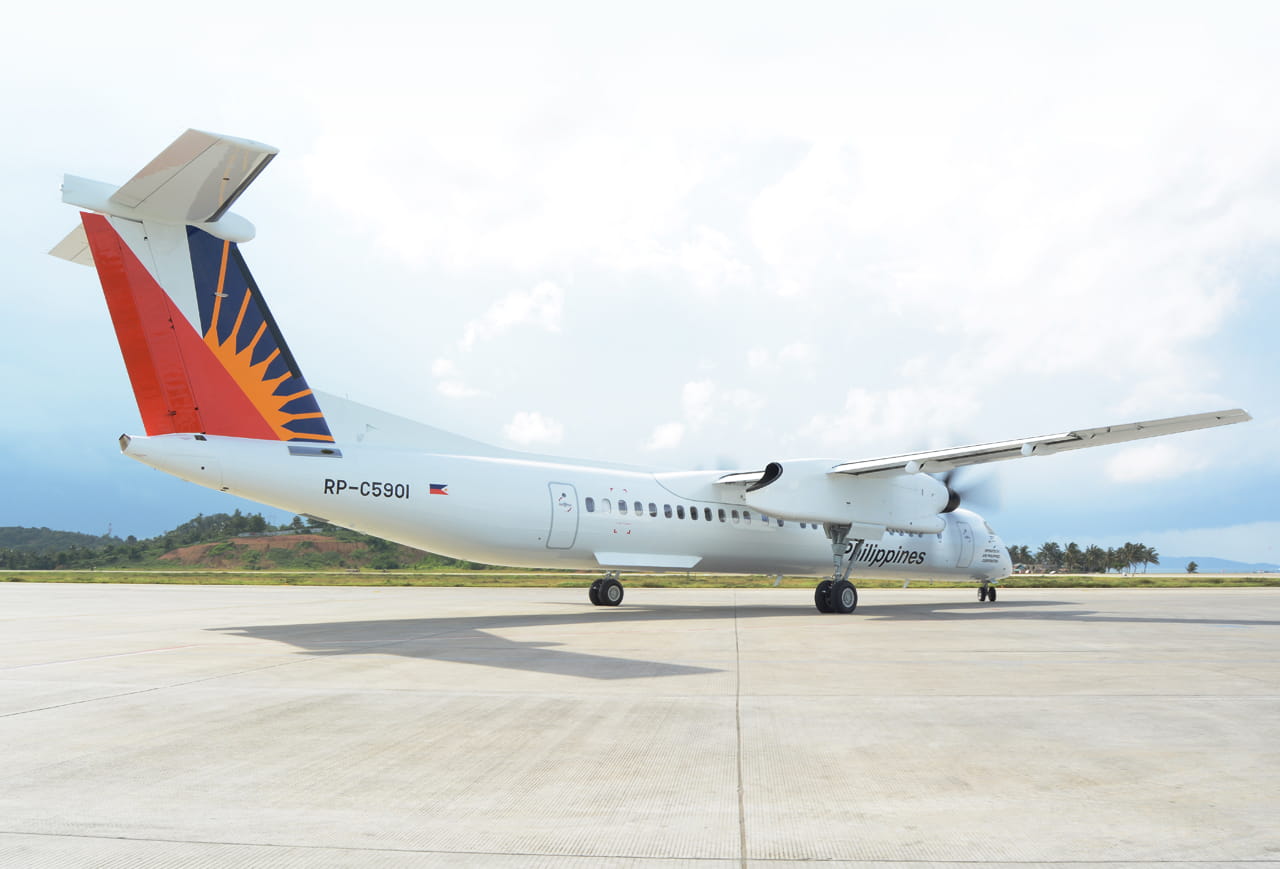 The PAL Bombardier Q400NG flew its first commercial service between Cebu and Caticlan, gateway to Boracay.

A PAL Airbus A340 with registry RP-C3438 flew to San Juan, Puerto Rico, to evacuate over 100 Overseas Filipino Workers (OFWs) from various parts of the Caribbean region affected by Hurricane Irma. PAL was awarded a four-star rating from Skytrax after a major multi-year effort to upgrade services under a “Get That Star” program that involved departments and personnel from all over the company.

PAL took delivery of its first Airbus A321NEO aircraft, enabling nonstop narrowbody flights on long-range routes from the Philippines to Australia, northern Japan and other points in the Asia Pacific region.

PAL accepted its first Airbus A350-900 aircraft, offering a top-notch high-tech cabin and extra range to operate nonstop ultra-long-haul flights to New York and Toronto.  The A350 was flown from Toulouse to its new home in Manila, where PAL unveiled the new A350 and A321NEO aircraft to a gala audience led by the President of the Philippines.

PAL upgraded its New York JFK route to full nonstop services, with a brand new A350 operating the first nonstop Manila-JFK flight, setting a new record for the longest commercial flight ever operated by a Filipino airline (and also the eighth longest commercial air route flown by any airline in the world).

PAL won the 'World’s Most Improved Airline Award' for 2019, as the airline that achieved the biggest leap in product and service quality among a Skytrax survey of over 350 leading airlines worldwide. PAL was ranked the 30th best airline in the world.

ANA Holdings, Inc., the parent company of All Nippon Airways, acquired a 9.5% equity interest in PAL Holdings, Inc. (PHI), ushering in a new era of partnership between Japan’s largest airline and the Filipino flag carrier.